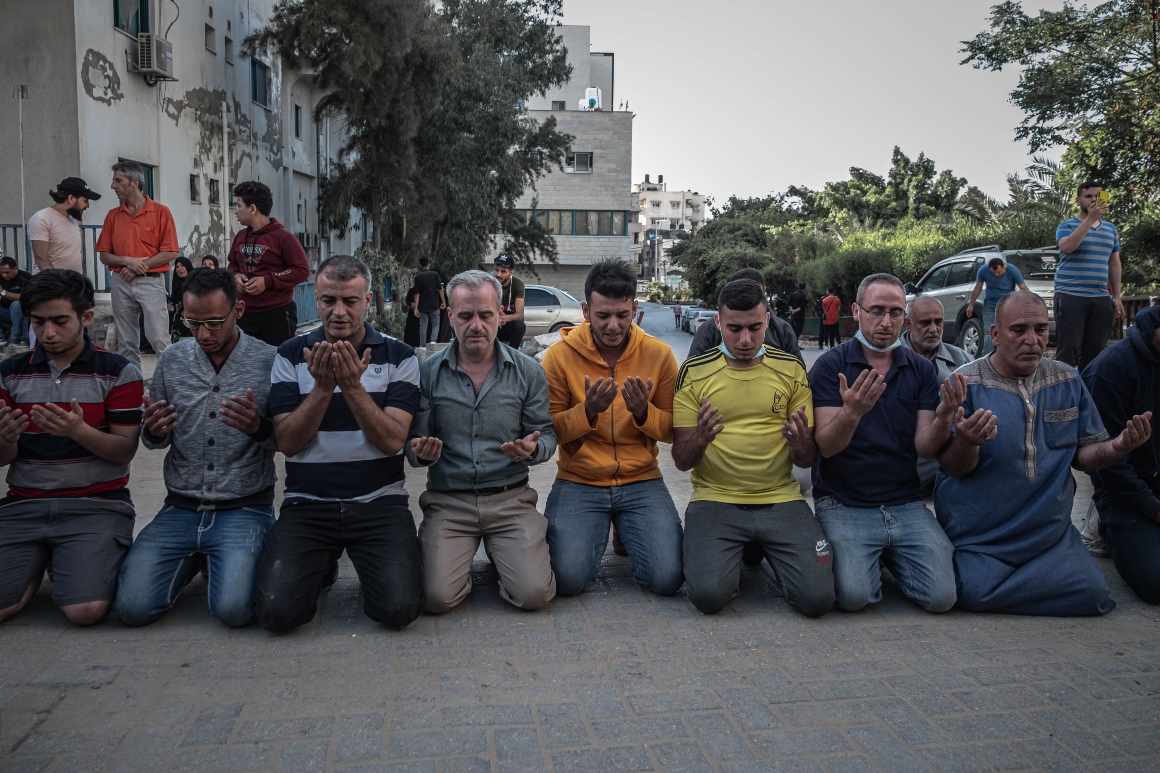 Hamas also pushed ahead and launched rockets from civilian areas in the Gaza Strip into civilian areas in Israel. One slammed into a synagogue in the southern city of Ashkelon hours before the evening service for the Jewish holiday of Shavuot, Israeli emergency services said. No injuries were reported.

Families were buried under piles of cement rubble and twisted rebar in the Israeli air strike early Sunday. A yellow canary lay squashed on the ground. Broken glass and debris covered blocks of streets away from the main downtown drag, where the three buildings were hit within five minutes around 1am

Hostilities have risen repeatedly over the past week, marking the worst fighting in the territory where 2 million Palestinians have lived since the devastating Israel-Hamas war in 2014.

“I have not seen this level of destruction in my 14 years of work,” said Samir al-Khatib, a rescue worker in Gaza. “Not even in the 2014 war.”

Rescuers were furiously digging their way through the rubble with excavators and bulldozers amid heavy clouds of dust. One shouted, “Can you hear me?” into a hole. Minutes later, first responders pulled out a survivor. The Gaza Ministry of Health said 16 women and 10 children were among the dead, with more than 50 people injured.

Haya Abdelal, 21, who lives in a building next to one that has been destroyed, said she was sleeping when the air strikes made her escape into the street. She accused Israel of failing to warn residents, as usual, to leave before such an attack.

As a result of the strike, “the underground facility collapsed, causing the foundations of civil houses above them to collapse, resulting in unintended casualties,” it said.

Among the people reported as killed was Dr. Ayman Abu Al-Ouf, head of the internal medicine department at Shifa Hospital and senior member of the hospital’s coronavirus management committee. Two of Abu Al-Ouf’s teenage children and two other family members were also buried under the rubble.

The death of the 51-year-old doctor “was a great loss at a very delicate time,” said Mohammed Abu Selmia, director of Shifa.

The health system in the Gaza Strip, which had been destroyed by an Israeli and Egyptian blockade in 2007 after Hamas took power over rival Palestinian forces, had been grappling with a surge in coronavirus infections before the most recent conflict.

Israel’s air strikes have leveled a number of the tallest buildings in Gaza City that Israel claims contained Hamas’ military infrastructure. Among them was the building that housed The Associated Press Gaza office and other media outlets.

Sally Buzbee, the AP’s editor-in-chief, called for an independent investigation into the air strike that destroyed the AP office on Saturday.

Netanyahu claimed that Hamas military intelligence operated inside the building and said that all evidence would be exchanged through intelligence channels on Sunday. Neither the White House nor the State Department would say if anyone had been seen.

When asked if he had provided evidence of Hamas’ presence in the building when he called US President Joe Biden on Saturday, Netanyahu said, “We are passing it on to our intelligence officials.”

Buzbee requested such evidence. “We are in a conflict situation,” said Buzbee. “We do not represent any party in this conflict. We heard Israelis say they had evidence; We don’t know what this evidence is. “

Meanwhile, the media guard, Reporters Without Borders, called on the International Criminal Court on Sunday to investigate Israel’s bombing of the AP building and other media organizations as a possible war crime.

The Paris-based group said in a letter to the court’s attorney general that the offices of 23 international and local media organizations had been destroyed in the past six days. The attacks were designed to “reduce, if not neutralize, the media’s ability to inform the public.”

The AP had operated from the building for 15 years, including through three previous wars between Israel and Hamas. The news agency’s cameras, operated from its top floor office and rooftop terrace, provided 24-hour live footage as militant missiles approached Israel and Israeli air strikes struck the city and its surroundings.

The most recent outbreak of violence began in East Jerusalem last month when Palestinians clashed with police in response to Israeli police tactics during Ramadan and the threatened displacement of dozen of Palestinian families by Jewish settlers. A focal point of the clashes was the Al-Aqsa Mosque, a common focal point on a hill revered by both Muslims and Jews.

Hamas and the Islamic Jihad militant group have recognized 20 fighters killed in the fighting. Israel says the real number is far higher and has released the names and photos of two dozen suspected activists it says have been “eliminated”.

The attack has displaced around 34,000 Palestinians from their homes, UN envoy to the Middle East, Tor Wennesland, said at an emergency UN Security Council meeting where eight foreign ministers discussed the conflict.

Efforts by China, Norway and Tunisia to get the UN body to issue a statement, including a call to cease hostilities, have been blocked by the United States, which diplomats said fears it could affect diplomatic efforts to end the violence .

The Palestinian Foreign Minister Riyadh Al-Malki called on the Security Council to take measures to end the Israeli attacks. The Israeli UN Ambassador Gilad Erdan called on the Council to condemn Hamas’ “indiscriminate and unprovoked attacks”.

The turmoil has also fueled protests in the occupied West Bank and fueled violence within Israel between Jewish and Arab citizens with clashes and vigilante attacks on people and property.

On Sunday, a driver rammed into an Israeli checkpoint in Sheikh Jarrah’s East Jerusalem neighborhood, where Palestinian families were threatened with eviction. Six officers were injured before the police shot the attacker, Israeli police said.

The violence also sparked pro-Palestinian protests in cities across Europe and the United States.

Israel appears to have been on strike in the last few days to do as much damage to Hamas as possible while international mediators work to end the fighting and stave off an Israeli ground invasion of Gaza.

The Israeli military said it destroyed the home Sunday of the Gaza Strip’s top Hamas leader Yahiyeh Sinwar in the southern city of Khan Younis. It was the third such attack in the past two days on the homes of high-ranking Hamas leaders who have gone underground.

SHARE THIS ARTICLE :
breakingbreakingnewsnewpostnewstodaytrump
Newer PostBill Gates had a reputation for exhibiting questionable behavior prior to the divorce
Older PostTaxing the rich? Executives predict Biden’s big plans will fail