Opinion | The gas tax is obsolete. Here’s a better idea. 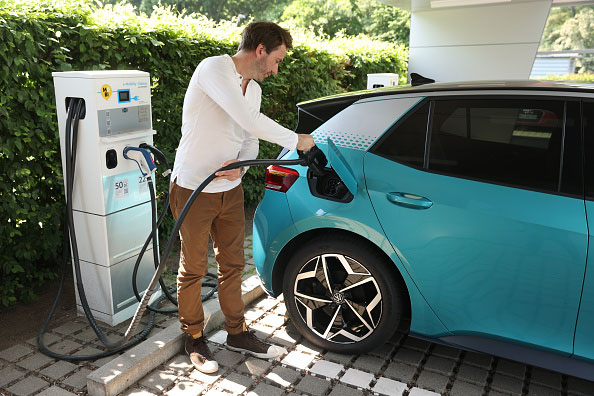 Since 1932, our land transportation has been financed primarily through the introduction of a fuel tax per gallon, which started at a penny per gallon. The tax was increased in 1956 to pay the Interstate Highway System and was adjusted a few times, but the last time it was increased was in 1993. Since then it has lost 68 percent of its purchasing power. And as more and more hybrid and electric vehicles hit the road, the link between fuel consumption and road use is weakening.

This contributes significantly to our crumbling infrastructure. Many states have allowed lower volume roads to deteriorate, ignoring increasing congestion and fighting a losing battle against a rapidly aging highway network. That’s what we all pay for: increased car maintenance. Loss of time in traffic. Homeland values ​​eroded. Jobs are moving away. Our quality of life suffers. As a country, our economic competitiveness suffers.

Yet we have all accepted this over the years because an increase in the gas tax is unacceptable. That’s why Congress decided to divert $ 148 billion of general tax revenue to the Highway Fund instead of setting other national priorities. Another $ 198 billion will be needed to fill the void over the next 10 years.

The federal fuel tax has outlived its usefulness. Both the impending electrification of the car fleet and the rapid increase in fuel efficiency of the country’s car fleet have brought the tax down. This will continue as vehicles become more and more efficient. We have come to the point that another solution has to be found.

Much attention is now being given to the idea of ​​a “vehicle mileage tax” (VMT) which would attempt to impose a usage fee for every vehicle using the roads, regardless of its energy source. However, there are two reasons why a VMT is not practical in practice. First, privacy. From my own experience as Secretary of Transportation in Maryland, I’ve seen firsthand the public’s fear of using only anonymous, aggregated cell phone data for planning purposes. I can tell you that the fact that the government is actually able to identify a person’s vehicle type and see where and when they are being driven is met with resistance that cannot be overcome. There are many people who cannot get a transponder to pay tolls for precisely this reason. Additionally, the idea that young people were accepting location tracking because of their convenience in using cell phones was not supported by surveys I oversaw as Maryland’s transportation secretary. The “Big Brother” argument will not go away.

The second obstacle to the VMT tax is collection costs. Currently, the fuel tax is collected at the pump and collected from 600 fuel distributors, which makes the collection very cheap. In contrast, the US has 263 million registered vehicles; we would go from 600 gas taxpayers to 263 million. Every vehicle needs to be tracked with mileage and possibly every fuel purchase. The unanswered question is how hundreds of millions of Americans will pay the tax due. Conservative estimates of the cost of simply collecting the tax exceed 15 percent of the revenue generated. I think that number is low.

What can we do instead? The solution is to move from a “user pays” to a “beneficiary pays” system. This approach takes into account that in our modern economy there are many beneficiaries who are not “users” of the national road system, but are definitely dependent on it.

At the moment, many who benefit from our transportation system are not paying for its maintenance or improvement. For example, those who have parcels delivered to their front door or use carpooling or shops at a dealer who has goods delivered by truck benefit from the federal highways system, even if they never get behind the wheel of a car themselves.

What would a “beneficiary pays” system look like? Introduce a federal surcharge on all commercial activity on US roads and highways of approximately 8 percent and divert the proceeds to the existing Highway Fund. A commercial surcharge would calculate the cost of our national transportation system to all who benefit from it. It aligns maintenance and improvement costs more directly to benefits. Instead of taxing individuals, it would be more similar to the system we have now in that it would incorporate costs into the final prices that consumers pay. And it would be fairer than the existing gas tax, as fuel guzzlers are currently subsidizing hybrid and electric vehicles.

For clarity, the surcharge should be applied to the value of the advertisement activity itself, not the value of what is being transported. Whether it costs $ 1 to move a ton of rock a mile or $ 1 to move a ton of gold a mile, the surcharge should be the same – eight cents. After all, the streets don’t know if you’re shipping stones or gold, but the wear and tear would be the same.

The most obvious way to identify a company’s commercial activity on the highway is to add the surcharge on what that company charges its customers for transportation services. The surcharge would only apply to commercial activities on the road or highway. For shipments that combine rail, air and truck transport, only the surcharge for the motorway section is charged. (The harder case is a company like Walmart or Amazon that ships its own products but does the shipping themselves.) These are numbers that companies routinely already have in their accounts. As a result, the surcharge would also be relatively easy to collect, as it could be assessed at the time companies submit their quarterly federal tax filings.

A conservative, preliminary estimate of the total commercial activity eligible for the surcharge is $ 960 billion, which would raise an estimated $ 76 billion annually – enough to have a significant impact on the required construction and maintenance of the roads of the country and also to invest in electrical energy charging and hydrogen infrastructure.

In contrast to the gas tax, this amount would be dependent on inflation and the economy. The income from a business activity surcharge would be independent of how the national vehicle fleet is refueled. And of course, the political benefit of abolishing the unpopular federal fuel tax for 225 million licensed drivers shouldn’t be overlooked.

Don’t assume that companies see this as a job-destroying tax. Many companies and organizations are calling for fuel taxes to be increased, sometimes significantly. Both the American Trucking Institute and the US Chamber of Commerce have called for a fuel tax increase to allow for the necessary investment in the system. Businesses know that a deteriorating transportation system, both in terms of condition and performance, puts a strain on business operations for which they are charged the costs. You lose billions of dollars each year to lost time and repairs to damaged equipment. Investing in transportation creates jobs and increases efficiency, such as reliable deliveries and fewer accidents.

Finally, a commercial activity surcharge makes constitutional sense. Historically, the justification for federal promotion of transportation has been the constitutional interstate trade clause. Applying the surcharge to actual trade on public roads not only resolves the long-term financial crisis facing America’s roads and more equitably allocates costs to benefits, it also brings our revenue system more in line with the constitutional intent of our ancestors.

Surcharge for commercial activity is easy and fair. It is time to get rid of the gasoline tax for good.