Opinion | What the White House doesn’t understand about disinformation 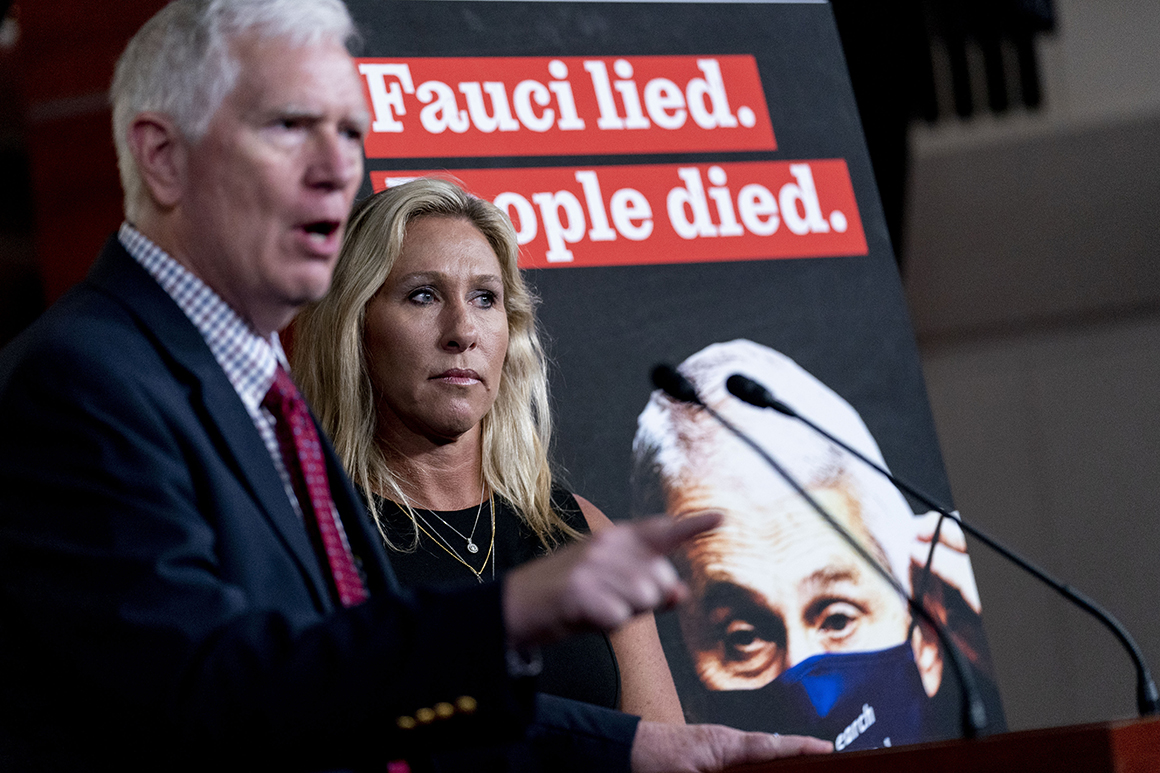 It makes you desperate that misinformation about Covid and other issues takes root so easily and requires constant monitoring and refutation. Misinformation – false and fake stories – has always been with us, but it didn’t really flood our political debates until the 2016 presidential campaign, as Donald Trump used it as his main political strategy on social media and television appearances. Trump’s exile from Facebook and Twitter has mitigated, but not tamed, the production and consumption of misinformation as his heirs have taken up part of his loophole to undermine and confuse.

The White House’s new strategy of instructing Facebook to tackle misinformation could generate some spectacular headlines. It could lead Facebook to throttle Covid misinformation. It could make a few public health attaboys. But so far efforts seem to backfire, especially among conservatives and social media users who have criticized the government for censoring Covid and vaccine-related information that it disapproves.

There is no precedent in the internet era for the US government to forcibly push a lost idea back into the bottle, so Psaki and the White House should remember their campaign and rely more on what several current academic ones tell us Studies about the fight have taught misinformation. There is evidence that we can deal with misinformation without resorting to direct censorship by encouraging social media users to be careful when posting.

No criticism of misinformation is complete without a passage detailing how journalists have sometimes been the greatest suppliers of this material. Reporters – and not just those from supermarket newspapers – have forged stories and deliberately duped readers with false reports. You have put forward various whispering campaigns alleging unproven misconduct and conspiracies by presidents, business leaders and celebrities as news. At the turn of the century, the excesses of yellow journalism contaminated our media. As Brent Staples wrote in the New York TimesUntil the last few decades, American newspapers routinely carried bizarre fake news about black people, portraying them as subhumans, innate criminals, rapists, and drug devils. And it wasn’t just southern newspapers, Staples points out, but almost every newspaper. The coverage of blacks was as dishonest and corrupt as any modern misinformation campaign, and it took several generations to reform. The centenary campaign against marijuana is another example of the press spreading misinformation.

Traditionally, the mainstream press has worked with government, industry, the labor force, and other leading institutions as agents of social control, using shame, restraint, and persuasion to achieve national political consensus. This gateway function faltered in the 1960s when thinkers like Rachel Carson, Betty Friedan, Ralph Nader, Martin Luther King Jr., Jane Jacobs, the Vietnam War critics and others attacked and undermined the consensus. Making the consensus machine dynamic was a great thing, but there was an undesirable side effect. The forces blocking inconvenient truths had also helped control the spread of nut bags. As the web and social media tore down the gatekeepers, inconvenient truths gained momentum. But also the nut baggery.

For example, in the years before the Internet, the John Birch Society had no idea how many people agreed that President Dwight Eisenhower was an agent of the international communist conspiracy. They lived in a state of “pluralistic ignorance” that prevented them from fully expressing their views. But the web destroyed that ignorance and encouraged its modern equivalents, the QAnon believers, to unite and spread their misinformation. Anti-Vaxxers like Robert Kennedy Jr. and broadcaster Tucker Carlson would never have gotten a chance to stir up their stinking trail of lies and deceit about Covid in the days before the web and cable news.

The most sobering thing about the misinformation of our time is how fast and how far it is moving compared to previous years. A 2018 MIT study found that fake and false news (labeled as such by six well-known fact-checking organizations) spread faster on Twitter than true stories, retweeted more often, and spread them more widely. Fake news is 70 percent more likely to be retweeted than real news, and the main distribution is people, not bots. MIT researchers – Soroush Vosoughi, Sinan Aral, and Deb Roy – attribute the super-proliferative power of fake news to the novelty and excitement that nonsense sharing brings. Nobody gets – or expects – a shock after sharing a message through community organizers offering clues about where residents can get vaccinated. But the vision of G-Man thugs they forcefully inject on the porch turned into one this week by Marjorie Taylor Greene tweet? That is enough to stimulate fight or flight in anyone. (She received 11,525 replies to this tweet, 5,852 retweets, and 14,826 likes.)

What’s the appeal of tweeting misinformation? “People who share new information are considered informed,” said Aralal science Magazine, and who doesn’t like to be considered a pioneer? “People are more likely to react with surprise and disgust to false news,” says Vosoughi, while real news evokes sadness, anticipation, and confidence. So great is the appeal of the scam that a BuzzFeed News investigation found that in the last three months of the 2016 presidential campaign, “the top performing fake election news on Facebook generated more engagement than top stories from big news outlets like such that New York Times, Washington Post, Huffington Post, NBC News and others. ”

A March study published in nature states that most social media users do not intentionally distribute fake news. The researchers contacted more than 5,000 Twitter users who shared links to two right-hand pages that fact checkers found unreliable. They made no effort to correct the tweeter’s tweet, instead asking for their opinion on the correctness of an unrelated, apolitical headline. The researchers did not expect an answer; they just wanted to remind respondents that accuracy matters. That single subtle memory seems to have enhanced the “quality” of the messages they later shared. “People are often distracted from considering the accuracy of the content,” write researchers David Rand and Gordon Pennycook. “So shifting attention to the concept of accuracy can lead people to improve the quality of the messages they share.” It would be great if everyone consulted a misinformation cheat sheet before tweeting, but that’s not that Case. Another group of researchers found that fact-checker takedowns of wrong articles almost never reach the people who share the wrong articles.

The good news is that over 80 percent of those polled in the nature Study said it was important to share accurate information on social media. In addition, respondents were actually keen to separate true reports from false reports when focusing on them; When people share fake accounts, the researchers found that often it is because they didn’t pay enough attention before clicking submit. Who is the hardest hit by fake news? People who are “more willing to overwhelm knowledge” write Rand and Pennycook elsewhere.

If a user shares something, it doesn’t necessarily mean they believe it, notice Rand and Pennycook. It seems that he is mainly trying to impress and entertain his followers. Social media is, of course, optimized for engagement rather than truth, and the impulse to be the first to tweet or retweet an article prevents many users from pre-judging its accuracy. These results contradict the popular belief that we have gotten into a vortex “according to the truth” in which people do not care whether something is true or not. Most people are interested in this, but still tweet rubbish. Many of us are known to commit this sin. Raise your hand if you’ve ever tweeted a bit of fake that you shouldn’t be.

If people are sincere and want to share accurate information – and if they are put on the right track to share more quality information, if they encourage them to share more accurate information – we might be inspired to believe that the Fighting misinformation is not hopeless. Both Twitter and Facebook are now flagging and suppressing what they think is misleading, and actually pushing Trump out of their service. But the labeling has had little success. An unintended consequence of warning messages is that some users are interpreting messages without Labels that are confirmed to be true by the social media platform. Sometimes you can’t win when you lose.

Instead of mangling Facebook or accusing it of murder, the White House might consider asking social media companies not to order users to think before posting. Whatever strategies the White House promotes to marginalize fake news –to forbid, “pre-order”, suspending, blocking, labeling, nudge, tweak the algorithms – we have to accept that there will always be a contingent that enjoys writing, reading, and sharing obviously untrue material. To varying degrees, we all seem just as attracted to the outrageously falsehood as we are disappointed by the dullness and predictability of the true. Our psyche tends to burn brighter when fueled by the fantastic and the amazing. This can be an insurmountable problem for realistic journalists who are learning how difficult it can be to compete with the fake stuff. In the 1920s and 1930s, a slang term emerged to describe this way of thinking. It was called “Thobbery” and was defined as the safe thinking of a person who is not curious to check their results.

It will always take mental energy to go against the wrong and the wrong, and no one will ever come up with a magic formula to erase misinformation. But that doesn’t mean we shouldn’t think before we retweet and ask our family, friends, and neighbors to do the same. The best guideline seems to be this: if you stumble upon a Brand tweet that could easily be translated into a Day Glo circus poster, leave it alone. Thobbery is for fools.

Why is there so little fake sports news? Is it because sports fans are familiar with the topic and ignore the hype? Send your speculations to [email protected]. My email notifications are all about misinformation. My Twitter Feed tweets only the fake. My RSS feed despises social media.

CORRECTION: The heading of this article has been changed to include the word “disinformation”.